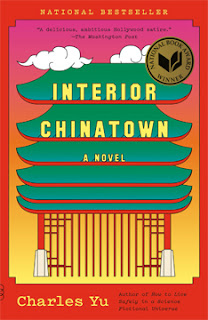 “Interior Chinatown” has a dead body — over and over again, a dead body — and there are two police detectives. BUT. This is not a murder mystery. It is a book about cultural shaming, invisibility, relevance, and it is done in a most unusual, creative way.

“Interior Chinatown” won the 2020 National Book Award for fiction. Charles Yu has written other books and, most notably, was a writer for the “Westworld” television series. So Yu has plenty of heft.

Willis Wu is the star of his own life. Although some reviewers have said Willis Wu is an actor who appears in the cop show “Black and White,” I don't think it shouldn’t be taken literally. The script framework and the acting references are ways Yu has chosen to examine the life of Asians. It doesn’t hurt to think of Wu as a struggling actor, but getting better acting jobs is not what the struggle is about: Wu must climb up the ladder from invisible Asian person to visibility as an American, without reference to ethnicity. That is the story. What Yu describes is the vulnerability of non-whites to being compartmentalized and burdened by cliches.

Just as the death of George Floyd sparked a monumental discussion and can't-look-away moments of Black cultural repression, the same holds for other non-white cultures. Also, Black people have different origin stories, yet they are lumped together as “Blacks.” In the same way, Asians come from a lot of different cultures but they are all lumped together as “Asians.” In one telling “scene” in the book, several Asian men are living together while they attend graduate school. They are from Taiwan, Japan, Korea, and India, yet they are interchangeable Asians. “Generic Asian men.” So two things: In skin-color groups, non-whites are subjected to prejudice both overt and subliminal, and they get lumped together.

What Yu also says is that there are certain behaviors Asians have to adopt to be acceptable, ones that meet expectations, however false, make them even more generic. An Asian, for example, who does not have an accent gives pause to non-Asians, Yu says. It does not compute and therefore might make non-Asians uncomfortable. So who gives in this tug-of-war? Do non-Asians pivot their thinking or do Asians align with their stereotype?

In any event, although this book is not a murder mystery, the author uses a clever framework to discuss the mystery that is currently roiling our country.