The Survivors by Jane Harper 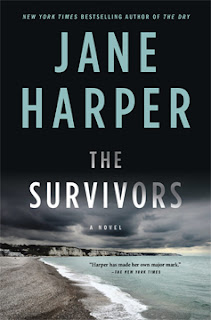 Here’s a new setting for you, courtesy of Australian author Jane Harper: Tasmania.

The deaths in “The Survivors” take place on a beautiful beach in Evelyn Bay or in its freezing waters. Tourists and residents like Evelyn Bay. There’s a lot to recommend it, but when the body of Bronte Laidler is discovered on the beach right outside the beach house she had been renting, there are no tourists hanging around upon whom blame can be cast. The disadvantage of living in a small town is there are only a handful of viable suspects. Yes, there could have been the random killer driving through town. It could have been a not-introduced-before resident who pops up as the killer in the second to the last page. But that sounds more like real life, not an expertly written whodunnit. What Jane Harper does so well is dissect small town life, the eddies and flows of relationships, the twining of family histories, the back story to almost everything in town. And so it is in “The Survivors.”

Kieran Elliot and his partner, Mia Sum, return to Evelyn Bay where Kieran grew up and Mia lived until she was about fourteen. They have come back to visit Kieran’s parents, Verity and Brian, who are getting ready to move. Brian has dementia, and Verity is frazzled. Kieran and Mia's baby, Audrey, is still portable enough that it should be an auspicious visit for everyone. If only there weren’t secrets from the past hanging over everyone and buried grudges brought to light again by Bronte’s murder.

A story from twelve years earlier still haunts the town, although it is honored now more in everyone’s unsaid agreement to not discuss it. Kieran’s older brother, Finn, and Finn’s business partner in a scuba diving service, Toby, drowned when they were out at sea in a huge storm. Kieran’s good friends from that time, Ash and Sean, still live in the town. Toby was Sean's brother. Ash has paired with Olivia, another classmate. And this is where Mia’s story comes in. Mia’s best friend from when she lived in Evelyn Bay was Gabby, Olivia’s younger sister. Gabby disappeared and was presumed drowned on the same day Finn and Toby died. The storm shattered the town in more ways than one.

Finn and Toby were older enough than Kieran and his friends, who were about sixteen at the time of the storm, that Toby left behind a wife and young son, Liam. Liam is now old enough to work at the restaurant his step-father owns and work part-time with his uncle Sean in the scuba diving business he took over. One of his co-workers in the restaurant was Bronte.

These are the main characters but they are not the only ones involved in the current murder and the storm of twelve years ago. It is through those main characters that Harper draws her readers into the world of Evelyn Bay, its loyalties, its animosities, and its unvoiced assumptions.

Even the police constable, Chris Renn, tasked with solving Bronte’s murder was around when Gabby went missing and Toby and Finn died. Perhaps he knows more about each case than he is willing to reveal. However, it is through Kieran’s character that we view most of the story, not Renn’s.

I applaud Harper for her detailed and nuanced storytelling. I cheered for everybody. I wanted no one to be the killer. I can’t say her resolution made me totally happy, but she didn’t have any choice. It had to be someone(s).