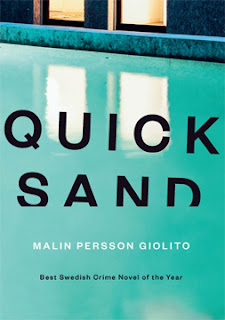 What a riveting book this was! And the translation by Rachel Willson-Broyles was terrific. Willson-Broyles’ work conveys a sense of a different culture while reading smoothly as though it had been written originally in English. Malin Persson Giolito has written a book with a full quota of suspense, overlaid by the social commentary for which Swedish writers are known.

When the story begins, eighteen-year-old Maja Norberg is awaiting her trial in jail. She is accused of participating in a school shooting with her boyfriend Sebastian Fagerman. Both Sebastian and Maja come from well-off families, especially Sebastian, whose father Claes Fagerman is a celebrity and fabulously wealthy. Was the shooting a thrill kill launched by two apathetic and disengaged young people? The answer slowly reveals itself in Maja’s first-person narrative.

Ah, but is Maja an unreliable narrator? Can we believe what she tells us? Maja’s dream-like life in jail contrasts with her sharp recollection of how events and introductions coalesced into the teenaged angst that led to the murders. During the trial, she sits removed and quiet on the outside, while suffering from inner turmoil. Her celebrity lawyer has winnowed her involvement down to only the useful parts, so Maja’s narrative adds substance and color to the trial testimony and statements.

One day Sebastian stopped by to see Maja at her summer job. Maja had no idea he even knew she existed. He is on a different plane and travels with a raucous crowd. Maja’s friend Amanda hooks up with Sebastian’s friend, Labbe, and the four of them head off to have a good time. Lavish parties, first-class travel, and excessive drug use are contrasted with Maja’s fairly normal home life, Amanda and Labbe’s good manners, and discussions with adults about Sweden’s political and social systems. Also present as the “good conscience” is classmate Samir Said, an immigrant with working-class parents. He is smart and motivated to move ahead. He and Maja, before Sebastian, were friends.

It’s not an aside when the students at Maja’s school attend a lecture by an American economist, but a display of the national philosophy that Swedes like to discuss. The economist’s trip was sponsored by Sebastian’s father as a treat for the students. Sebastian uses the occasion to petulantly and dismissively demean progressive societal goals. In what resonates within the current political situation here in the United States, the fictional economist (who never appears again) says:

“But I think you were trying to make a different point, Samir. To say that there is a limit to how unequal a society can become and continue to remain a stable democracy. And you’re right.”

“It’s no crazy conspiracy to say that there are those who benefit when social ills can be blamed on a minority. To pretend those problems are due to … ‘the blacks’ or, as in the 1930s, ‘the Jews’ or, as you call them in Europe today, ‘the immigrants.’”

This sets the underlying conflict between Samir and Sebastian. But this is just one of the threads Giolito weaves into her story. It is also about teenage anxiety, about parent-child relationships, about friendships, about expectations, about powerlessness and love and abuse. Giolito does her weaving so well that her story sticks around long after the last page has been turned. I started the book thinking that Maja would prove to be a conniving, spoiled brat who was startled to find herself caught. Giolito pulls out other possibilities, until Maja’s truth is revealed.