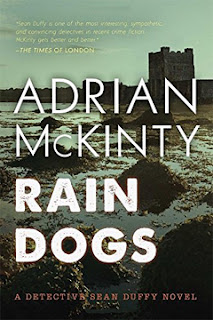 Is Adrian McKinty Ireland’s poet laureate? He should be, although he is a fiction writer and there probably is fierce competition in the land where words rule. Even though McKinty lives in Australia now, his Irish voice is strong and melodic. It’s also funny, ironic, resigned, feisty, and tantalizingly evocative of Belfast in the time of The Troubles. “Rain Dogs” is McKinty’s fifth book featuring Detective Sean Duffy of the Carrickfergus CID.

McKinty plays with history and place names a little, but it’s all for a worthy cause. At the start of “Rain Dogs,” it is 1987 and Muhammad Ali has just paid a visit to Belfast. (In real life, Ali visited but not in 1987 and not ever in Belfast.) Sean has had a chance to meet his idol while on guard detail. Unfortunately, it’s all downhill from there, as murders and murky dealings soon follow.

A Finnish delegation is in town to eyeball an old industrial building as a possible location for their electronics plant. In war-torn Belfast, partially eviscerated by violence and economic bad times, that could mean hundreds of new jobs. How unfortunate, then, that Sean is rolled out on his day off to investigate a crime at the delegation’s hotel. The head delegate’s wallet has been stolen. The smallness of the crime irritates Sean, who is even more irritated to find most of his bosses already involved. But the buck stops with Sean. He soon makes short work of the theft and in the process meets a young, pretty journalist, Lily Emma Bigelow of “The Financial Times” of London.

Saddened by the recent departure of a young woman with whom Sean thought he might settle down and reflecting on his unconventional life — wake up, eat breakfast, check under car for bombs, drive to office, do the crossword puzzle in under five minutes, fuss about which record to listen to at work, put on riot gear (or not), rescue boss’ wife’s cat (or not), try to catch a bad person, drink to the edge of oblivion (but with impeccable taste in single malts), smoke a blunt in a storage shed, hope to sleep until morning (or not) — Sean is ready for something challenging to come his way. And a pretty face wouldn't be unwelcome either.

His challenge comes in the form of a locked room mystery. Or rather, in this case, a locked castle mystery. That pesky Finnish delegation is at it again. This time, however, it looks like the pretty journalist has leapt off the highest tower to her death in the courtyard below. Despite the caretaker’s assurance that he had checked the grounds for wayward tourists at closing time, he must have missed Lily Bigelow, a tagalong with the Finns on a tourist visit there. He finds her body during his morning rounds before the castle opens to the public.

Sean catches the suicide case and determines that there is no way she or anyone could have snuck in after hours. The castle walls and portcullis were impregnable. Lily had come in the previous day, but CCTV did not catch her leaving. Where had she been hiding? It soon becomes obvious that she had not voluntarily leapt but had been pushed or dropped by someone else. Aged Mr. Underhill, the caretaker, must be the villain, because no one left the castle before the police arrived and no additional person was found in an extensive search of the grounds. Q.E.D.

Although it isn’t obvious if there is a connection to the murder or the Finnish delegation, Sean is suspicious of the car-bombing death of one of his superiors. He just couldn’t get his old knees to bend enough to look under his car before setting off after a mysterious phone call, his widow says. Even if it is not related, the death is a reminder of how vigilant all police must be.

I enjoyed the slow uncovering and linking of clues. I loved how McKinty gave Sean a love of esoteric classical music and single malt Scotches. I love how Sean used words in fun, to spite, to cajole, to spar. Sean Duffy is a great character.

And McKinty is a wonderful writer. Here he has Sean describing another character with a “broad, camp West Belfast accent so grating that it could be banned under several of the Geneva Protocols.”