The Borrowed by Chan Ho-kei 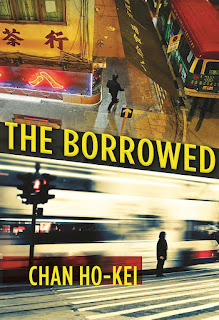 “The Borrowed” is an extraordinary collection of novellas with common characters. The six stories are all set in Hong Kong and go backwards from 2013 to 1967. They cover modern Hong Kong, the handover of Hong Kong from Britain to China, and the unrest under British rule. Chan Ho-kei has given us an historical perspective along with some cracking good detective stories.

The first story, “The Truth Between Black and White (2013),” introduces the character of Inspector Sonny Lok, twenty-seven years with the Hong Kong police and now head of Kowloon East Crime Unit. The first case is presented at the bedside of his mentor, retired Superintendent Kwan Chun-dok. Kwan is in a coma and dying. Lok has to solve the murder of Yuen Man-bun, the head of an extensive family business. One of Yuen’s close companions or family members has done it, and they are all in Kwan’s hospital room. Lok has a device, he tells the family and friends, that can be hooked up to the brain of the legendary detective Kwan, and it will allow Kwan to determine the killer via a computer. Under the questioning of Lok, the family and friends repeat their alibis and stories before Kwan.

This and the subsequent stories are clever, old-fashioned detective stories. They fade from Lok as the predominant character to Lok and Kwan together to Kwan as the main man to just Kwan. I kept thinking, “Clever, clever, clever,” throughout the stories. And Chan ends his book with a bang, just to show he can.

Chan cleverly (there’s that word again) presents the stories backwards in time so you can notice how the future of the characters is affected by occurrences in the past. I don’t know why the title of the book is “The Borrowed.” Does it refer to some of the characters borrowing experiences from the past to inform the present? The book is certainly about choices. Are they living on borrowed time, because they certainly could have been killed at certain points?

Here is Chan in the afterword to his book:

“I’d started out planning to write a classic detective novel, but now I’d pivoted towards writing a social one. These two varieties aren’t necessarily at odds with each other, but it wouldn’t be easy to mix them together — the flavour of one would easily overpower the other. In order to solve (or avoid) this problem, I chose the structure of six standalone novellas, each one fuelled by mysteries and clues, but all six fitting together to form a complete portrait of society.”

And here is Kwan giving advice to Lok:

“[D]on’t forget the basic duty and mission of the police … make the right decision ….”

This book was published in 2014 but here’s an MBTB star!