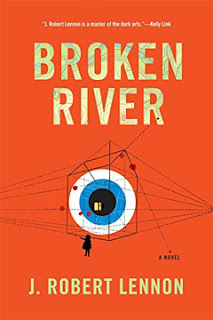 This is a wow! of a book. J. Robert Lennon has created a perfect rendition of a complicated story. His slew of characters have distinct voices. His three main storylines converge and leave nothing wanting.

A man and a woman are murdered in an isolated place near their home in upstate New York. Their young daughter escapes. The killers are never caught. Twelve years later, an artist, a writer, and their twelve-year-old daughter move into the renovated house that once belonged to the doomed family. Stuff gets stirred up and suddenly there is a threat in the air once again. But not all of the menace is physical.

There is an unusual additional “character,” The Observer. Usually the voice of the unseen narrator simply burbles along unnoticed in a third-person story. The reader is not aware of a distinct presence, just of time and action moving forward. Sometimes, the presence has vague substance but is still not intrusive. Usually an author covers any third-party remarks by making it a thought process of one of the characters or a poetical description of the surroundings or a psychological discursion.

The Observer is given a substantive insubstance by Lennon. It does not take the place of the third-party narrator but is in addition to it. The Observer has some ghostly/spiritual attributes, but there is no judgment, curiosity, or religiosity involved. There is no sense that it was once human. Nor is it godlike. It is simply an amorphous, omniscient, omnipresent something. It does not affect the course of action. Or does it?

J. Robert Lennon is a clever, clever writer. The Observer is the storytelling itself. As The Observer grows in its abilities and “power,” such as it may be, so does the story strengthen and tumble towards its end. The Observer is a glorious construct by Lennon. It also provides a segue from one character to another.

Kurt is the sculptor-father. Eleanor is the writer (of “chick-lit”)-mother. Irina is the smart and imaginative twelve-year-old daughter. They have fled New York City to put their family back together and to stimulate their creative processes. (And to put distance between Kurt and his mistress, Rachel.) Lee Samuel “Sam” Fike is the nineteen-year-old daughter of a mentally ill woman and the sister of a imprisoned pot dealer. Irina thinks Sam is really the daughter of the murdered couple from years ago. Daniel is Sam’s brother. Once he gets out, he hooks up with Yetta, the girlfriend of another imprisoned pot dealer. All these people live in Broken River.

Broken River is the arse-end of nowhere. It has fallen apart, thus giving a second meaning to its name. The home the little family occupies may be renovated, but it is still plagued by “mold blossoms” that creep through from the damaged understructure. If people have gone there for a second chance at life, they must first fight through the rot. Metaphors may rain down, but it is a light misting, not a torrential downpour.

Joe and Louis are the bad guys. There is no subterfuge about their identities. They are the men who were involved in the murders.

At about the halfway point in the book, all the characters have been introduced and they are now free to wend their way towards each other. The reader and The Observer can now feel the thrill of forward movement.

Irina and Eleanor, unbeknownst to each other, have started to look into the murders. They have lurked, then joined a group, CyberSleuths, of people who sift through clues of old crimes, make reasonable or outrageous guesses, and have (mostly) fun being armchair sleuths. Without thinking about how it might play out, Irina has posted a picture of Sam and claimed that she is the surviving daughter of the murdered couple.

Lennon moves from character to character, sometimes lingering longer on one. He gives each one a separate tone through style and language. He can move from the angst/ennui of a twelve-year-old to the lunkish thoughts of a hard-boiled criminal to the anxiety of a sophisticated middle-aged woman to the neediness of a self-involved middle-aged man. This has earned “Broken River” an …