The Twelve Lives of Samuel Hawley by Hannah Tinti 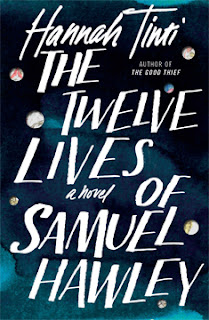 Hannah Tinti is the much-lauded author of “The Good Thief.” In “The Twelve Lives of Samuel Hawley,” she once again creates a story larger than life, laced with quiet passion and heart.

Bullets usually go through me, says Samuel Hawley, as he collects an egg carton’s worth of them. That is not to say he isn’t harmed by the bullets, but he manages to bleed, then heal. In an early part of the book, Hawley has to take off his shirt in public to race down a greased pole. (Tinti’s got you intrigued, hasn’t she?) People are stunned when the bullet scars are revealed.

Someone who was not stunned was Hawley’s daughter, Loo, twelve years old when the story begins. Actually, there are two stories: one set in a facsimile of the present time and one set mostly when Hawley meets Lily, Loo’s mother. I say “facsimile” because there are certain modern day elements missing: the ubiquitous Internet and the even more ubiquitous cellphone. Could the “present day” story actually be set pre-2000s? Yeeees. But. There is a reality television show about a man and his crew who ram into offending ships to protect the marine integrity of the area off the East Coast. When Loo is older and begins working on the wait staff of a local restaurant, one of her older co-workers sprouts a punk/goth look. I assume Tinti purposely makes the time period vague and she creates her own world (sans much technology) to benefit her story. Even the part set in the past has a haziness to it. One of the many firearms ever present in the book is a rifle which belonged to Loo’s grandfather who used it in a war. What war? Who would use a rifle (and then bring it home) in a war? Was he a sniper? Do snipers get to bring home their rifles? Was it the Civil War? You can see that there are hints about time, but they fog the window rather than let you see through it.

How does Hawley become the recipient of all those gunshot wounds? Not surprisingly, it turns out he is a criminal. The only other choice would have been law enforcement officer. Tinti soon lets on that Hawley and Loo have moved many times. Other families might have fire drills at home. Hawley has quick exit routines. Always on the run and always packing firearms: pistols, revolvers, shotguns, rifles. Loo learned to shoot all of the above very young.

Finally, father and daughter return to Olympus, Massachusetts, where Lily was raised. Lily died before Loo was one. What is left and worth returning to in Olympus is a crotchety old woman, Mabel Ridge, Loo’s maternal grandmother, who immediately slams her door on Hawley and Loo when they come knocking. So much for the tender reunion. Mabel’s story is gradually revealed as the book makes its way to Samuel Hawley’s twelfth life.

Each of Hawley's wounds has its own chapter. Hawley was the dickens when he was younger, and collected trouble and gunshot wounds with alacrity. Even after he met Lily, who was the dickens on her own, Hawley still kept his toe in the criminal waters. The pleasure of Tinti’s story is learning about the trials of the forging of the father-and-daughter bond. Hawley does not want Loo to follow in his footsteps, but he still teaches her how to hotwire a car. There’s a complicated and conflicted parental message there, for sure.

It was a pleasure to watch Loo’s growing friendship with a classmate, Marshall, whose mother is crazy in a terrifically eccentric and unanticipated way. When Loo first connects with Marshall, it is to break his finger for harassing her. It could only go uphill from there.

Tinti doesn’t just say Hawley and Loo shoot firearms. She describes the guns, shotguns, and rifles, and how to shoot them. Hawley and Loo don’t just sail, Tinti describes every roll, pitch, and yaw. The stories are imbued with facts and touches — just enough, never too much — that amplify each part of the story she tells. “Twelve Lives” is a master class in creating the three dimensions and five senses of a fictional world.

So this is “Twelve Lives” in a nutshell. How did Hawley come by all those scars? What was Lily like? Why is Hawley on the run? Why does he finally attempt to settle down in Olympus? How weird are all the people of Olympus? Is karma a bitch?