The Long Drop by Denise Mina 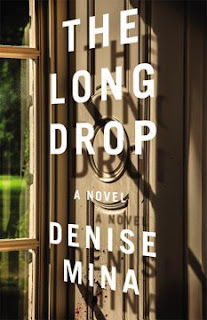 What do you do after you’ve written a bunch of much-praised, dark crime novels? You don’t go to Disneyland; you write a dark non-fiction crime book. And you write it with style.

“The Long Drop” is only non-fiction in the sense that it is based on actual crimes in 1950s Glasgow and the actual trial of the accused perpetrator, Peter Manuel. At his trial, during which he fired his lawyers, Manuel talked for six hours on the witness stand, providing rich material for author Denise Mina.

One of the crimes for which Manuel was convicted was the murder of three women in William Watt’s home. Watt’s wife, sister-in-law, and teenage daughter were the victims. Although Watt was out of town at the time, he was arrested for their murders. Manuel was a resident of the local prison when he claimed he knew who had really killed the women and could even produce the gun that murdered them. Manuel provided a detailed description of Watt’s home and what the killer had done there. This is Mina’s starting point for her story.

There is no dispute that Watt met with Manuel before Manuel was arrested for the Watt and other murders. In Mina’s story they spend many hours together one long night. Did Watt suspect Manuel of having been the murderer at the time? Was Watt the actual murderer? (It is clear that Manuel accused Watt of being the murderer of his family during Manuel’s trial.) In the book, Watt is an alcoholic who goes on a night-long drinking spree with Manuel. Manuel is portrayed as someone who is not capable of empathy, cannot “read” people’s emotions, and has unpredictable bursts of anger. Watt is portrayed as someone who has a mistress and maybe found it inconvenient to be married, has criminal connections, and fancies himself one of the city’s elite.

Denise Mina turns fact into fiction by supplying her version of what went on during that long night of drinking, including meeting with Glasgow criminals, like crime boss Dandy McKay. Here is Mina’s description of McKay:

Dandy wears a suit, double-breasted with a broad stripe in blue and pink. He looks like a settee. He has a red carnation in his buttonhole, wilted, denoting the hour. His tie is purple and green.

The story of that night alternates with scenes from Manuel’s trial a few months later. Mina's perspective of the case presents intriguing possibilities about guilt and innocence, and presents some issues as ambiguous.

Glasgow in the 1950s has never gleamed with such a dark and shiny luster as it does in Mina’s book. She flexes her Glaswegian muscle to present the characters behind one of Glasgow’s most infamous stories. Even when Mina sets a scene, she does so with choice and evocative words. For instance, “The grate is chrome, long and pinched, a prissy kiss of a grate.” She packs more in her 240 pages than most authors would in 420.

P.S. The British cover to this book gives a graphic hint to what "the long drop" is.