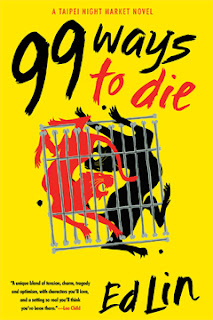 I’d like my history and political commentary wrapped up in a tale full of humor and exotic Taiwanese meat, please. Luckily, Ed Lin is currently serving that right up.

Set on the island of Taiwan (Republic of China), and featuring the Shilin Night Market, Lin has created a series that captures an authentic look at a community of many different cultures, rooted in how they perceive themselves not as Chinese but with their own unique identity. The political situation between China and Taiwan has many of Taiwan’s citizens precariously walking the line of correct behavior and speech. Don’t know much about Taiwan? Ed Lin will school you, and entertain you as a bonus.

Chen Jing-nan has an alter ego, “Johnny,” pitchman for his food stand at the night market. Johnny speaks English, knows American idioms, flirts with the women, cajoles the men, jokes with everyone. Everyone is his friend, at least until about a minute after they buy food from him, then he’s on to the next customer. Jing-nan, on the other hand, is shy. He's open-minded and anxious to avoid conflict.

Nancy, Jing-nan’s girlfriend, is a brainy Ph.D. candidate in biochemistry. Dwayne and Frankie are his night stall workers, whom he inherited from his parents after they unexpectedly died while Jing-nan was still in college in the U.S. Peggy is a former childhood classmate. Peggy also happens to be rich, rich, rich and connected to mainland Chinese interests. (Lin explains why this is an unseemly link in Taiwan.) Jing-nan also has an uncle, Big Eye, who is a bigshot in the crime syndicate on Taiwan. These are the standard characters in the Shilin Night Market series, of which “99 Ways to Die” is the third.

One night, in full view of a police contingent, Peggy’s father, the notorious businessman Tong-tong, is kidnapped. The kidnappers don’t want money; they want a low-power chip one of Tong-tong’s companies supposedly has. Peggy doesn’t know how to find the chip, so she commandeers — and not very politely — her former classmate. Jing-nan doesn’t exactly like the foul-mouthed and insulting Peggy but he doesn’t exactly dislike her either, but maybe leaning more towards the latter. Plus, Tong-tong is his landlord in the night market. So, Jing-nan says yes. Which means Frankie, Dwayne, Uncle Big Eye, and Nancy also are involved.

Jing-nan’s Taiwan (mostly Taipei) is not the tourist’s Taiwan. Lin exposes the false walls and dark alleys of the area — without venturing into noir territory. He brings up Taiwan’s racism against immigrants, government corruption, venal criminal organizations, and the political pressure from China. But Jing-nan’s boyish and almost-innocent demeanor and his outward acquiescence balance the grim forces eddying around the populous island state. There is steel underlying Lin’s humor-filled crime novel.

As a connoisseur of great last lines/paragraphs, I think Lin has a pretty good one to conclude “99 Ways to Die.” Now pass the grilled intestines.
Posted by Barbara Tom at 11:48 AM