Who Is Vera Kelly? by Rosalie Knecht 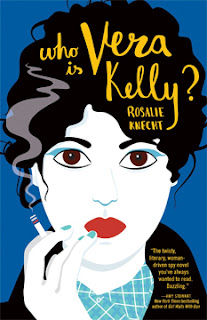 “Who Is Vera Kelly?” lives beyond the expectations created by the misleading cover picture. It is not yet another book with an unreliable female narrator. It is not a plucky young woman goes to the big city book, although this perhaps comes closer than the other to describing Vera.

Toggling between stories set in the late 50s and 1966, the book does not display a distracting and dizzying juggle. Rather, the earlier story lends direct coherence to the 1966 story. So refreshing.

Vera is fifteen or sixteen when the earlier story begins. She does not fit in with her “peers” in high school. She accidentally overdoses on one of her mother’s medications. That leads to her mother sending her to juvenile detention, removing Vera from the few things and people she loves. It turns out Vera is tough. Lonely but tough.

The 1966 story takes place in Buenos Aires, Argentina. It’s one of those times in Argentina’s turbulent history when the balance of political power seems fated to tilt in favor of an outlier. The communists, sponsored by the U.S.S.R., are fomenting rebellion in Argentina and other South American countries. Vera, who speaks Spanish and French, is an American spy for the C.I.A. She presents herself as a Canadian student seeking an advanced degree at the local university.

Using her cover story, Vera meets some student radicals, gets a hint of a terrorist conspiracy, and operates a sophisticated technical listening outpost to eavesdrop on the current government and the student radicals. She gives information to her handler that indicates the political pot is about to boil over. But this is not a James Bond tale, and that makes all the difference.

Vera is smart, wily, and intrepid but not foolhardy. She would never go unarmed down those basement steps in the dark to investigate the serial killer. She seems so real and human and vulnerable. She is willing to make sacrifices and practical decisions for her mission. She romances an male ex-pat to cement her cover, even though she is a lesbian. As hard as it is, she tamps down her desire to frequent one of “those” bars to find companionship. As I said, Vera is lonely but tough.

The grown-up Vera is very much a product of the tribulations she had to overcome and the independence she had to foster at a young age. (Thank you, Mom, she may someday say, for being such a bitch.) Author Rosalie Knecht brings in so many layers of character and plot in ingenious ways. I was transfixed.

At random — not that I could lose by doing this — I picked a page to find a quote, and this is what I found:

I had found the apartment in San Telmo with the help of a motherly rental agent in a pink suit who had tried to cheat me on her percentage not once but twice, and reacted with a broad and charming laugh both times I pointed it out, as if we were flirting on a date and I was removing her hand from my thigh.