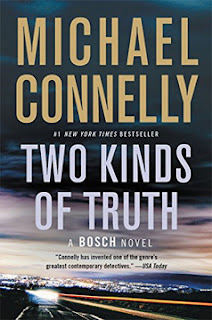 “Two Kinds of Truth” is the upteenth-millionth Harry Bosch book. We have watched Michael Connelly’s creation age, get knocked down and rise up again, suffer personal tragedy and public accolade, and fight to do more than merely exist. Now a case from the past has endangered the fragile peace he has carved out for himself in his seventh decade.

Since his unwarranted exit from the Los Angeles Police Department and his subsequent lawsuit, Harry has found satisfaction working on cold cases for the San Fernando PD, mostly as a volunteer. His office is an old jail cell, with a working lock! Then he is called out to examine the site of a current homicide because of his experience. Two pharmacists have been gunned down in cold blood. That case leads to Harry going undercover for the first time in a long time as an “old man” addicted to oxycodone.

Then an old case, one for which Preston Borders has been awaiting death for thirty years, is suddenly viable again. Complex DNA testing was not available thirty years ago, so in a re-examination of evidence from the case, Borders is suddenly cleared of the murder of a young woman. Another convict, long dead, is implicated instead. Suspicion is now thrown on other “evidence” found in Borders’ apartment linking him to the dead woman. That evidence was found by Harry, and now Borders and his attorney are saying that Harry planted it. Of course, Harry didn’t. Haven’t they been reading Connelly’s books? Harry is a straight arrow.

Harry’s half-brother, the Lincoln Lawyer, Mickey Haller, is engaged to help Harry regain his reputation for honesty. He puts Cisco, his biker investigator, onto it. What Harry, Mickey, and Cisco uncover is a clever bit of shenaniganizing, which means a clever bit of plot.

Ooo-wee, Harry has his hands full!

Connelly builds his stories up brick by brick. Short of seeing the gears clicking along in Harry’s brain, Connelly lets you see his insights and observations. Through Mickey, Connelly presents a meticulous legal case, but one full of surprises. This. This is what is fabulous about Connelly and this is what keeps people like me reading him slavishly. He can create a good story and satisfy the mystery reader’s need to know. What Connelly might lack in flourishes, he makes up for in substance.

Long may Harry plug away in his jail cell, unceremoniously righting old wrongs and standing up for what’s right and good.