American by Day by Derek B. Miller 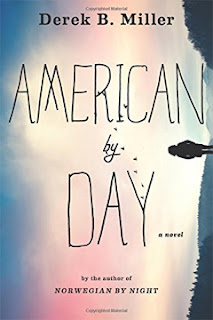 The story takes place in 2008 in upstate New York, a month after the events in “Norwegian by Night,” just before the presidential election that elected Barak Obama. Derek B. Miller puts in several references to the politics of the time. And one of the central issues is the shooting death of a black boy by a white police officer. But having said that, this is a story about 40-year-old Sigrid Ødegård, a police chief in Norway, who tries to find her older brother, Marcus, in the United States. He has gone into hiding following the death of his girlfriend, Lydia Jones. So the question is: Did he murder her?

What sends Sigrid across the ocean is a puzzling letter her father received from Marcus. It signals a sadness neither the father nor Sigrid can explain. Over the Big Puddle, in upstate New York, where Marcus lived and taught college, Sigrid connects with Sheriff Irving Wylie. He and sweetly innocent Deputy Melinda Powell are investigating Lydia’s death and Marcus’ disappearance. It would be hard to find an odder or kinder team.

Lydia was the aunt of the young African-American boy shot by the white police officer. The black community is riled up. Lydia was a study in grief. Could she have taken her own life? If she had, it would be a blow to her religious family. At the same time, Sigrid is positive her gentle brother could not have murdered Lydia. But she hadn’t connected with him for a long time; perhaps he had drastically changed. What a mess!

Boston-born Derek B. Miller (who now lives in Norway) does the tricky trick of giving us a picture of the United States as seen through a stranger’s eyes. We are an odd bunch of people, with odd social tics and political ideas. Sigrid is the perfect lens. Her mind is open, her intellect is unimpaired, her instincts are humane.

I loved this book for its humor. (Not as much as I loved “Norwegian by Night,” however.) I appreciated the outsider’s look at our country.