The Infinite Blacktop by Sara Gran 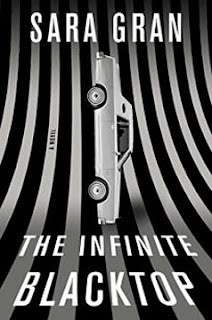 Sara Gran is brilliant in the third book in her Claire DeWitt series. “The Infinite Blacktop,” however, isn’t strictly a mystery despite being billed as one. Yes, there are criminal mysteries to be solved, including who is trying to kill Claire and what happened to teenage friend Tracy after she disappeared twenty-plus years ago. But the biggest mysteries for which the metaphysical, spiritual, and definitely odd sides of the world are revealed — but maybe not explained — are who is Claire DeWitt and what is her purpose.

I read the first book, “Claire DeWitt and the City of the Dead,” when it first came out many years ago (c2011). I thought there were flashes of brilliance then, but the writing was too uneven, so I gave it a “meh.” Maybe, in fact, the writing wasn’t uneven. Maybe I just wasn’t ready to read something like Sara Gran’s vision of the world. Maybe now I am ready and I can see the gem at the book’s core shining through. Jill Hinckley, one of the original founders of MBTB, certainly liked that first book a lot.

So here I am in 2019, reading a book published in 2018, having come late to the party. I recently did a compilation of “best books” from about six or seven publications for our book group, and “The Infinite Blacktop” made two lists (NPR, Washington Post). Maybe Sara Gran would have made more lists, except people like me waffled about whether it was a true mystery book. Precisely speaking, “The Infinite Blacktop” qualifies. It contains murder, attempted murder, fraud, theft, and blackmail, some of which were committed by Claire DeWitt. But Claire’s journey is surrealistic, metaphorical, and may be more Ingmar Bergman than Sherlock Holmes.

“The Infinite Blacktop” begins in 2011 with Claire emerging from her crumpled car after a traffic accident. Someone tried to kill her, she groggily decides. But who? What case had she been working on? Whose toes had she stepped upon? The story of her current investigation slowly (and I mean slowly) emerges. In the meantime, there are sections devoted to what Gran labels, “The Mystery of the CBSIS.” That story takes place in 1999 and it’s about Claire working to acquire enough hours to get her private investigator’s license in California.

“The Infinite Blacktop” is also about what started Claire on her life of crime detection. It’s about a mysterious book written by Jacques Silette, “Détection.” It’s about three teenage girls who become enamored of this book and begin to solve mysteries in their Brooklyn neighborhood, until one of them, Tracy, disappears. One of them, Kelly, becomes obsessed with finding out what happened. One of them, Claire, just runs off after a while and tries not to look back. But the mystery of what happened to Tracy dogs Claire in her various incarnations as a detective throughout the years. Its essence seems also to be the essence of what Claire is looking for.

So the rough details of the book are: 1) Claire attempts to track down her would-be assassin, and things get bloody in 2011; 2) Claire solves a cold crime to build hours towards her license back in 1999; 3) Claire looks back on her life after reading Silette and meeting more Silettians, followers of Silette’s course and philosophy of detection. The Silettians turned out to be as much family as she had ever known or maybe would ever know, keeping in mind that family doesn’t always mean love.

I’m reluctant to give any more details of the detective stories because they are almost beside the point. The solutions are derived almost mystically with an aha! moment. If you’ve ever seen “The Music Man,” Claire’s detection is similar to Professor Harold Hill’s “the think method” he uses to teach students to play musical instruments.

Claire is intense. She is strong yet captivating in her vulnerability. She has multiple feet in multiple dimensions, but she is strongly rooted in the fragile humanity of our world. She seeks answers for others, even if she cannot find them for herself.

Claire’s goal may be at the vanishing point of an infinite highway, but Gran’s goal was very successfully accomplished here. Of course, MBTB star!