Only to Sleep by Lawrence Osborne 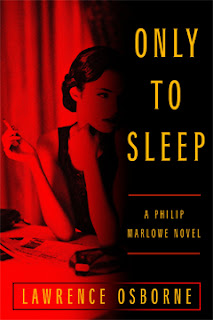 I am going to ask you a series of questions, but don’t worry, I will also give you the answers. My answers.

What if the main character is the iconic noir private investigator Philip Marlowe? What if the people who control Raymond Chandler’s estate (who also, FYI, control Graham Greene’s estate) ask the writer — who has in fact written much more than travel pieces — to continue the saga of Philip Marlowe, one that has already been continued by Robert B. Parker (“Poodle Springs” and “Perchance to Dream”) and John Banville, writing as Benjamin Black (“The Black-Eyed Blonde”)? If you are smart, you hesitate, as did Lawrence Osborne, and then you say no. Then you say yes.

What makes Lawrence Osborne’s take on Marlowe different from Parker’s and Banville’s? To begin with, he ages Marlowe to his 70s, places the action in 1988, puts the aged and decrepit detective in the exotic country of Mexico, and lets it rip.

There aren’t enough words to describe how fabulous Lawrence Osborne’s take on Marlowe is. Parker’s version was pretty faithful and hard-boiled, imbued with Parker’s style. Banville’s was strangely flat, while faithfully honoring the word play and noir aspects. Osborne’s is exploding color and taste and word play, plus convoluted characterizations and sinuous noir.

In "Only to Sleep," Marlowe is pathetic, a retired gumshoe in a quiet Mexican seaside town. He dies slowly as the minutes and hours go by. He is not dying of anything specific, just of old age, ennui, self-pity. He thinks enough of lingering on, however, to use mosquito nets and a Japanese sword built into his walking stick.

Then a U.S. insurance company hires him to figure out if they are being scammed by a life insurance claim for the death of a rich guy, Donald Zinn, in Mexico. It’s two million smackers and the widow is a looker. Why not, says Marlowe.

Marlowe’s investigation and surveillance take him over a good deal of scenic Mexico. Thus, the travelogue aspect. But it’s the kind of travelogue that makes you want to go there, eat the food, see the flowers, hear the sea, drink things that are colored green, learn who Rita Hayworth was.

The torturous ways of the scam have been deftly described by a lot of authors, quite a few of whom wrote the legendary noir books of a time past. Osborne competes admirably. But, as we know from reading Chandler and his famous “missteps,” the plot is hardly the thing. It’s how Chandler, and now Osborne, get from the beginning to the end. Maybe that is why having a travel writer write this Marlowe paean was a genius stroke. Osborne brings us Mexico in 1988 in all its lushness or aridity, amiability, and sensuality, and plops a puzzlement in the middle. Maybe it’s not a whodunnit; maybe it’s a didsomebodydunnit. (I won’t torture you; I’ll answer this. There is a whodunnit, but one that seductively leaves a few holes to peek through.)


Between miles of maize tall, forked saguaros rose into a dark-blue atmosphere, and I slept with my silver-tipped cane beside me in the hot beaten-down grass and dreamed of the bodies I had seen a lifetime earlier. Bodies sometimes sprawled in fields a little like this one, or else slumped at bars where they had been shot in the temple. The unfortunate can die anywhere, and they often looked like children asleep, with faces that I had known when they were living.