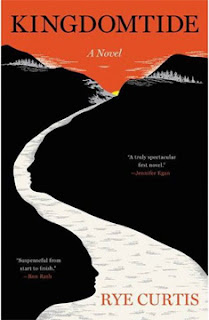 I crossed my fingers and hoped this was a thriller. The premise seemed right: a 71-year-old woman survives a plane crash in the Bitterroot Mountains of Montana; a loner forest ranger, who has lost her (metaphorical) way, is obsessed with finding the survivor, despite all assumptions that the woman is dead; a one-eyed ghost is rumored to ride a glyptodont in the deep, dark forest.

Nope, not a thriller, not a mystery.

But, yep, one of the best books I’ve read in a while.

The forest ranger has just gotten a divorce from her polygamous husband, has taken to drinking copious amounts of merlot, and swears a lot. Her fellow ranger has a blue nose. His pigeon-chested friend comes to stay for a while to get over his failed marriage and takes up embroidery. The search-and-rescue man hauled in to find the airplane and occupants seems less concerned with finding anything but his own weirdness.

The 71-year-old woman had a normal life in a normal (for her part of the world) small town in Texas. She was church-going, gardened, took pride in her home, loved her husband. Her husband died in the crash, and she begins to re-evaluate her life as she tries to survive in the dense and antediluvian forest. Her small town was hot and flat and predictable. The Bitterroot overwhelms her, fights and challenges her. It is green and lush, but also stark and dangerous.

And so she changes to accommodate it. She drinks water from her husband’s boot, washes naked in the river, eats a nameless skinned animal, tries to catch food from a river by tossing a hatchet into it.

Should you venture into the wilds of Kingdomtide, you will find humor, strangeness, compassion, acceptance of how weird the world and people can be, and how we should not judge lest we be judged.

Almost nothing was sacred or predictable. The writer took pains — no, not “pains,” rather “joy” — in his writing. And I hope you take joy in your reading.