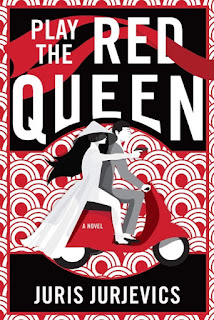 First, I have to acknowledge and pay tribute to Juris Jurjevics as the co-founder of Soho Press, a publishing company that includes Soho Crime, one of the best mystery publishing imprints. Jurjevics died in 2018. “Play the Red Queen,” his last novel, has just been published posthumously by Soho.

The crime genre owes a lot to Mr. Jurjevics, co-founders Laura and Alan Hruska (now also including their daughter Bronwen), and editor Juliet Grames. Together, they allowed the light of many authors to shine. Soho Crime specializes in stories set in other countries. One U.S.-size does not fit all, and we are the richer for Soho’s work.

“Play the Red Queen” was a personal project for Jurjevics. Although he was not born in the U.S., he served in the Army and was sent to Vietnam. His book is set in Vietnam in 1963, after the U.S. sent its “advisors” in to help depose the king and install the “democratically elected” Ngo Dinh Diem, but before the full incursion by U.S. forces happened. (Jurjevics plays with the innocence the characters have about Vietnam’s eventual fate.) There’s a terrible ring of authenticity to his book.

Picture a Raymond Chandler-esque Saigon-based hero, Staff Sergeant Ellsworth Miser. He is a world-weary, smart-assed veteran of the Korean conflict and now, in 1963, he has been assigned a stint in Saigon as an Army CID investigator. In a change of pace to his usual misbehaving GI cases, Miser has been sent to investigate the assassination of Major James Furth. He was shot from a distance, in plain view of many witnesses, by a woman riding on the back of a motorcycle, carrying a distinctive gun. Her shot was dead on. And poor Major Furth was dead on the street.

What distinguished this death was the placement at the scene of the crime of a specially printed red playing card showing a skull. It is the token left by “The Red Queen” or “Lady Death,” as Saigon has named her. Major Furth was not her first kill.

Why was the major killed? His record seems unremarkable. He hadn’t  tortured any small animals or children. He is an emissary of the United States government, a pencil-pusher. What does he have in common with the other two victims, also nondescript military men? Does the Lady simply cruise the streets looking for a victim and woe betide the unfortunate bystander? What is known is the Lady is a crack shot, making seemingly impossible hits from the back of a moving motorcycle.

Miser has been partnered with Sergeant Clovis Auguste Robeson. The two of them have been partnered for a while and they get along very well. Robeson is smart and speaks English, French, and a smattering of Vietnamese. Still Miser has rank on him. Robeson is black, and the implication is it would be difficult for him to rise any higher. The United States back home is under the turmoil of  the civil rights movement, and that prejudice has followed Robeson to Vietnam.

As Miser and Robeson search deeper into Furth’s background, they realize there is a large stinking pile of governmental rot floating around. That’s when the murder doesn’t simply become a problem to solve by catching the elusive killer. There is a method to the madness, and they must guess who the next target is. The only hint is that it is someone big.

President Ngo Dinh Diem, his brother Ngo Dinh Nhu, or U.S. Ambassador Henry Cabot Lodge (Jr.)? Big stuff for two lowly CID men to handle. But it becomes obvious that very few can be trusted to work this case because loyalty can be a flickering commodity and life is sometimes cheap.

Jurjevics has placed a stellar crime/spy story in the midst of the collision of superpowers taking place in Vietnam. Also, Buddhists are being persecuted by Diem and monks are immolating themselves in protest. Massive amounts of money and goods are being sent by the U.S. to the South Vietnamese government, so somebody better fix this quickly. The situation is complex, but Jurjevics gives us a well-thought out version of it. His main characters are really just guys trying to get along. The Vietnamese culture is elusive sometimes, less so to Robeson than Miser. Jurjevics dramatizes Lodge and his wife Emily. Lodge especially looms larger than life. Jurjevics fictionalizes them but also accords them their real roles in what happened in Saigon while the Lodges were there. The author does it seamlessly.

This is a helluva book! MBTB star!