The Lost Ones by Sheena Kamal 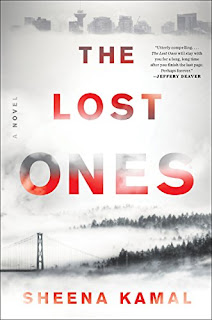 I kept misreading the title as “The Lost Souls,” but “The Lost Ones” does a better job of describing the book. Nora Watts, the indomitable main character, has not lost her soul, even if she loses her way sometimes.

“The Lost Ones” is a rough book to read. The bad things come in waves and are unrelenting for long stretches. Nora is a tough character. She doesn’t exist for you to love her. She doesn’t even wonder if you are cheering on her survival. She exists to find her way back into a semblance of a life, less a warrior than a survivor. She says,

“I am an ex-alcoholic survivor, sober off and on for thirteen years, celibate for just as long, who owns no property, has no friends, and spends her nights wandering the city with no one to love except a dog that is perpetually in heat.”

In Vancouver, B.C., Nora is a research assistant/errand person to a prize-winning journalist and his private investigator husband. She secretly lives in the basement of their office. She has a quiet dog named Whisper. Her life is small, contained, but not without brief moments of satisfaction. Her talent, used by both her bosses, is she can tell when someone is lying. Barely not a sixth sense in a woo-woo way, but an extraordinary psychological/physiological/who-knows ability.

One day a man and a woman walk into Nora’s carefully balanced life. They say they are the adoptive parents of Nora’s child, a child she had given birth to and given up fifteen years ago. Bonnie has run away from home. Her parents need Nora’s help to find her, because Bonnie may have run away to find her, her birth mother.

The circumstances of Bonnie’s conception and birth are traumatic for Nora, and she turns the couple down. But there is the remainder of a conscience, a sense of responsibility — nothing maternal, she thinks, but something compassionate, perhaps. On her own, Nora begins the search for a young girl who deserves better.

Nora starts off small. Spying on Bonnie’s home, Nora notices a car definitely providing surveillance, but not in a good way. Nora calls in an ask from her former AA sponsor, a cop named Brazuca. Who owns the vehicle attached to the license plate Nora has written down?

Things get bigger and messier from there. It shouldn’t have been that hard to track down an errant teen, but if someone has taken that errant teen against her will, that is a different story. Soon Nora has to call in a lot of favors. She also takes without asking, stoops to new lows, grabs if it will help her in some way. She is ruthless, obsessed, and worried. Bonnie is just a name; Nora hadn’t even held her as a baby. But perhaps the process of being a mother isn’t always under one’s control.

There are so many characters Nora runs into, each with at least a tiny story themselves: Carl the resort caretaker; Lorelei the sister; Harrison Baichwal the fugitive; Simone the drag queen; Mike Starling who saved her. And on and on. It’s the wonderful stuff of which stories are made.

And running through the book is the whole story of what brought Nora to her knees and what raised her up again.

There’s more determination than happiness in “The Lost Ones.” More drama than humor (or “humour” — it is Canada). But there’s enough grit and resolve to power through to the end. It’s a strong book and I am glad I read it.

“No Going Back,” the third Nora Watts book, is set to be released soon.

A belated MBTB star!
Posted by Barbara Tom at 12:46 PM