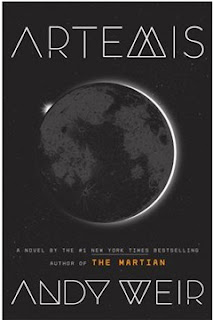 Luckily for his audience, Andy Weir is a meticulous geek. Part of what makes his book such an above-average page-turner is his ability to balance a thrilling caper with science facts and science-based guesses. What kept people reading “The Martian” is still evident in “Artemis.” Weir is pretty good at pairing “what if” scenarios with tenacious protagonists and tense situations.

To call Andy Weir’s works “science-fiction” understates what he does in his books. “Science-fact-based-fiction” would be more accurate. In “Artemis,” Weir creates a settlement on the moon called Artemis, after the Greek goddess of the moon. He throws in myriad details to lend plausibility to the establishment of such a base. People live there on a permanent basis — the main character, Jazz Bashara, does not remember another home — but one of their main economies is tourism.

Jazz is a genius. It doesn’t take her long to learn something. She is a trouble-maker, a rule-breaker, an illegal risk-taker. She’s also lazy. That has something to do with the fact that all her life people have been telling her not to waste her talents, but defiantly, she has decided to waste them, except in non-traditional, criminal ways.

For someone who has a quick mind for the scam, she is financially poor, so poor she sleeps in a “coffin,” a bunk. She dreams of a shower (with grey water recycling, of course) of her own, a private room in which she can stand up, and food other than “gunk,” the nutritious but tasteless algae-based food. In her own precise way she has decided that 416,922 slugs (Artemis’ currency) is what she needs to attain a better standard of living. She knows her porter job merely provides the bare essentials. Her smuggling operation brings in a little more, but she is still far, far, far short of her goal. Then one of her clients for whom she regularly obtains contraband offers her one million slugs to do a job for him. After an oh-so-brief hesitation about the illegality of the proposal, she says yes.

What’s the fun in a caper that operates flawlessly? What could a criminal with a warped but stern moral code learn from this project? Remarkably, when her project goes south, she is neither deported nor jailed. But what does happen is Jazz subsequently determines the nefarious backstory of how Artemis really operates. The lead-up to the extraordinary headline-making caper that follows is delicious.

Thank you, Andy Weir, for creating a plausible and exciting future. Also, thank you for bringing a thoughtfulness to what must bind people together.