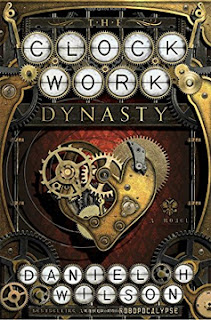 I remember when Daniel H. Wilson’s book, “Robopocalypse,” came out. It was a snap-crackle-pop of a book from the very first page. I thought it was more explosive than bubblegum and sparklier than champagne. It was a robot adventure with “A Wrinkle in Time” moral core. I hunted down Daniel H. Wilson to interview him. It helped that we both live in Portland, Oregon. I concluded he was 1) a smart person and 2) had more adventures in him, and 3) a human sensibility would always be at the center of his work.

So here we are with “The Clockwork Dynasty” many years later. I enjoyed the hell out of it.

There are these robots, see, only they aren’t called robots, they’re called “avtomats.” They are having a violent internal disagreement. A human, June, gets caught up in it. Coincidentally (ahem), she has a piece of machinery important to them and she knows about clockworks and machines and repairing automatons.

Eventually, Wilson’s story spans 5,000 years, but the core events take place in two storylines. Avtomat Peter awakens in Russia, along with avtomat Elena, whom he calls his “sister.” He’s big, bigger than an average adult human male, and she is small, like a human child. With no memory of what has come before he and Elena were dug out of a muddy hillside, Peter lives to serve the tsar, after whom he is named. Avtomats live longer than humans, so Peter’s story covers a period from the early 1700s to the present time.

June is doomed to live just a normal human life, should she be so lucky. She has spent her young life thus far, and a lot of grant money, tracking down automated dolls. Their clockwork apparatus intrigues her. This fascination was passed down from her grandfather, who also bequeathed her a strange “relic.” It’s crescent shape doesn’t indicate what its use might be. It’s composition doesn’t either. June hopes one day to crack that mystery as well. In the meantime, she plays with dolls.

When Peter met June. All hell was breaking loose.

Moral of the story: When you run from an avtomat, try to be faster than at least one person.

Obviously, this is my kind of book. Many things may be forgiven in pursuit of a good story, but I didn’t agree at all with Publishers Weekly’s particularly harsh review that there were so many offputting things. I thought “The Clockwork Dynasty” was fun, with interesting characters, great historical touches, and movie-ready visuals.