The Reckoning on Cane Hill by Steve Mosby 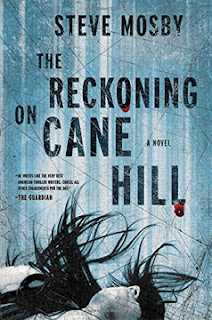 British author Steve Mosby has been scribbling away for ten books or so, but “The Reckoning on Cane Hill” is the first I have heard of him. Apologies to Mr. Mosby, who has won awards and recognition, on being slow on the uptake.

A woman, Charlie Matheson, died in a traffic accident two years before she suddenly appeared alive in a field and later collapsed in front of a store. That kind of gets you, doesn't it? You want to read more, don’t you?

Detective Mark Nelson, on a police force in an unnamed town in an unnamed country — although we presume it’s somewhere in Great Britain — is handed the case of finding out who “Charlie Matheson” really is. After two years, Charlie’s husband has moved on and now has a pregnant wife. It could be complicated to reintegrate her, if this mystery woman really is Charlie, but she apparently doesn’t care that the former husband has moved on. She has come back from Hell with a message. If she delivers the message, she can then live in Heaven as her reward.

In a separate narrative, Detective David Groves has been dealing with his own loss. A few years earlier, his two-year-old son, Jamie, was kidnapped from his home. The kidnapper was never caught. Now bones have been uncovered, along with artifacts that indicate the body is that of David’s son. David’s grief seems neverending, but he chooses to keep it at bay by working hard. His marriage has fallen apart, his wife having chosen another, more destructive path to assuage her grief. Then David receives a message on his son’s birthday, “I know who did it.”

Also thrown into the mix is a character from one of Mosby’s prior books, “The 50/50 Killer.” John Mercer destroyed his well-being and his work as a detective hunting a serial killer who forced couples to choose which one of them would die. Mark Nelson’s first day on assignment was John’s last. In theory, after leaving the force, John has been working on a book about the killer, whose identity and background were never uncovered. John appears to be a mentally broken man.

As these three storylines work toward each other, Mosby shows that the trail of broken lives, disappointments, and deaths might reveal a horror on a much larger scale. Indeed, this is a horror story more than a crime story. Mosby propels his story by making his readers wonder whether Charlie really has returned from Hell. If so, what kind of a God or Devil does she represent?

The ending was a little strange and I’m not sure if I liked it, but Mosby is an expert wrangler of suspense and certainly knows how to grab a reader’s attention. I certainly was propelled for almost the entire book to find out how Mosby was going to tie up his threads.