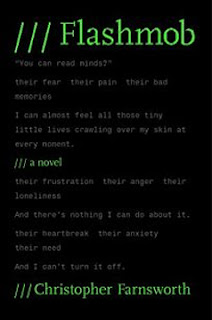 John Smith. Now there’s a character name for you. Easy to remember and it immediately impresses upon you that here is a man with something to hide. And what he has to hide is that there is nothing you can hide from him. He can read minds.

Christopher Farnsworth has created an unusual protagonist, one he places here, in a world you would recognize. His story smacks of sci-fi, but it isn’t really. It’s about greed and human nature and the herd mentality. Very timely, rather.

At the core of Farnsworth’s story is a tale of a piece of computer code and the cyber world run amok. It's perilously close to our own media situation, with “fake news” and Russian interference. A virulent and vitriolic piece of code was written with the purpose of influencing people on social media. As a result, hate mobs are being instantly created. It is apparently a small step from writing hate to actually physically attacking a target.

A young woman from a tawdry reality show was the first big target. Behind the scenes the people from the show got along, although the scripted show portrayed her as the villain. The dark website Downvote created a mental frenzy among its subscribers, which resulted in the woman eventually being shot.

I saw on my own Facebook feed just yesterday a picture of a woman and the words plastered over the picture, “Get this woman,” because she had allegedly stolen something. There was no link to a regular news story or police website or anything to verify that the picture and what it represented were true. There were a lot of yeah-get-her comments and shares. After having just finished this book, I thought that post was scary and the book scarily prophetic.

John Smith was Special Forces, his special power used by our government to affect military conflicts. After tiring of that, Smith became a security consultant, a high-priced bodyguard. As a result of a prior case, he just happens to be attending the young woman’s wedding when the assailants attack the event. Smith disables the shooters, who proved to be ordinary schmucks with a lot of anger issues, driven by Downvote to become a deadly flashmob.

As a result of Smith’s unplanned involvement, he becomes acquainted with an FBI agent, a tech billionaire with federal legal problems, and the billionaire’s bodyguard. The FBI agent mostly puts impediments in Smith’s path. The tech guy, Aaric Stark, hires him to assuage the guilt he feels for having had an inadvertent role in getting the code developed. The bodyguard, a young woman named Sara Fitch, tags along with Smith to make sure her boss’ money is well spent.

There are a lot of bangs and booms, bombs and skullduggery, but not a lot of head-scratching computer blah-blah-blah, fortunately. It’s a pretty straight-ahead story about being a good guy trying to catch a bad guy.

One of the things I liked about this book — which I liked very much — was something that I first encountered with Ursula LeGuin’s Earthsea series: the thought that morally there was a payment for every special power used. Every pain Smith visited on his opponents was given back to him psychically at some later point. It was the price he paid for his “gift.” That’s such an intriguing proposition in a fictional world where the author very well could have rigged it so his hero suffered no ill effects. Super man versus human man, and Farnsworth chose human man.

This book is very readable, relatable, and scary, especially in an age when a fake news story can lead an armed man to storm a pizza place to rescue the non-existent victims of a pedophile ring masterminded by a presidential candidate. For real.