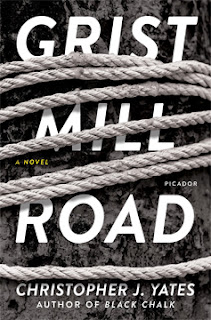 Ah, success begets imitation. It’s only flattery if the imitation is successful, so say I, and this is successful on many levels. “Grist Mill Road” runs on the road paved by “Gone Girl” and “The Girl on the Train.” This, along with the recent “The Woman in the Window,” deals with narrative sleight-of-hand. You think you know where the trick is leading, but you don’t even understand how the game is being played.

Middle school children made the news the summer of 1982 in a small town in New York. Fourteen-year-old Matthew tied thirteen-year-old Hannah to a tree and shot her thirty-nine times with a BB gun. Twelve-year-old Patch witnessed some of it but didn’t do anything to stop it. Patch later untied Hannah from the tree and Matthew, his best friend, was sent to wherever fourteen-year-olds go who break the law.

Twenty-six years later, in a way only books of fiction can ironically devise, Patrick is married to Hannah. Patrick has had many nicknames in his lifetime, including “Tricky,” a name given him by his best friend, and “Patch.” Yes, that Patch. Hannah, one-eyed Hannah, having lost an eye in a BB gun incident in 1982, is a crime reporter for a New York newspaper. She knows a lot of cops. Patrick, because this later story is set in 2008, has lost his job in the financial downturn of the time. A lot of the first part of the book is eavesdropping on Patrick’s thoughts as he tries to re-make his life in light of his sudden unemployment. Hannah tries to entertain him, and unburden herself in the process, by describing the lurid details of the stories she covers in The Naked City.

Hannah often wakes up screaming from the nightmares she has. Patrick drifts more and more into a fantasy cooking world he has developed: a virtual The Red Barn Restaurant, where his innovative and delicious recipes can come to life. Both have not seen Matthew in decades.

Soon Hannah has some sections of the book to herself. Her friend, Detective McCluskey, eventually reveals the details of a disturbance that bears directly on Hannah. The shocking revelation propels a lot of the secrets that have been stored inside people for twenty-six years to come pouring forth.

Finally — and I don’t think this is much of a spoiler, since if you look at the table of contents, you will see Matthew’s name heading a lot of the chapters — Matthew’s story is in the driver’s seat for much of the last part of the book.

Who do you, poor befuddled reader, trust? Suffice it to say there are no straightforward paths here. And while tragedy piles upon tragedy, you should know that Christopher J. Yates infuses his book with humor. If you can’t know the joy of life without also knowing pain and suffering, apparently you cannot know tragedy without comedy. Yates uses his humor sparingly and to great effect. For instance, when Patch is getting ready to shop at the market, Hannah will add some sort of punny farewell, like “Don’t forget the cabbage, Patch.”

Then when Patch is hit by the lightning bolt that is his parents’ divorce, “The information was all there being fed into me like data, only what came out the other end wasn’t just the wrong conclusion, it was a table lamp. A swordfish.”

In describing being bored by talks by the local naturalist, “… while glaciers left me cold and pine needles didn’t spike my interest, there was something about the topic of cement that lit me up like gunpowder.”

Yates writes well and has created an intriguing, if somewhat convoluted, storyline. I had trouble with the final reveal of Matthew’s story, and that is the main reason I am not giving it an MBTB star. But that’s just me. Bet this book is a major hit and you’ll see it on the big screen shortly.