The Other Side of Everything by Lauren Doyle Owens 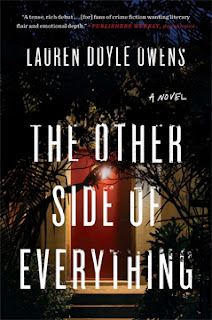 “The Other Side of Everything” is an elegant debut novel. Unlike some of the more “literary” novels I’ve read lately, crime is at the heart of this book.

Who is killing retirees in a southern Florida community? Is it for their homes? No, because this story is set in the aftermath of the recession and housing foreclosures in 2008. There are vacant homes aplenty. Once upon a time this was a great place for young families to escape their miserable lives elsewhere, a fresh start. And it was mostly good, as we see in flashbacks: neighborhood get togethers, friendships, warm summer nights. Now all that is gone.

The first victim is probably in her 70s. She has been clobbered and killed by a cast iron kettle. A lot of her fellow oldies have passed away or moved on, so the once active connections have frayed somewhat. Yes, new, younger people have moved into the neighborhood, and they are represented by a couple of the revolving narrators. But so far, it is only older women who are being murdered.

A lot of Lauren Doyle Owens’ characters were inspired by her own neighbors. She came up with the idea for this novel after a particularly trying point in her own life. She is beset by anxiety, lately induced by the recent release of this novel. If that anxiety is responsible for her detailed attention to the inner workings of divergent characters, then it may be a worthwhile sacrifice.

Amy, in her thirties, is one of the younger characters. Young as she is she already has battled cancer, a loss of confidence in the artistry of her painting, and a crumbling relationship with her husband. She lives behind the first victim, and it is that first view of her neighbor’s house on fire that propels her into the neighborhood mystery.

Maddie is a teenager in the neighborhood. She is fifteen. Her mother walked away, presumably, from her family not long ago. Her father works long hours to support her and her younger brother. She lives in a turmoil of hormones, depression, and anxiety. She is a cutter. She becomes involved in the neighborhood mystery when a homeless man she is fond of is arrested for the first murder. Also, someone broke into her room, specifically, and tore it apart. Was it this homeless man she considered a vague friend? Was it her quiet brother?

Bernard is the only old main character. Through him we relive life in the 60s when all the families were moving into the area and becoming friends. Through him we see the current survivors and the fear they have that any one of them might be the next victim. They begin pairing up to live together for safety. Bernard is assigned widow Maryanne, who reminds him of his dead wife, Irene, but mostly because Maryanne takes care of her home and can cook. Bernard’s home had been reduced to a dark, dusty place in Irene’s absence.

Owens does a great job of bringing each of her main characters to life. We see their concerns, their joys, their puzzlements. We see life isn’t cut-and-dried for them. The three main characters are lost in place.

At the point when Owens resolves the murders, so much more has broken free in her characters’ lives. This is the strength of her story.