She Rides Shotgun by Jordan Harper 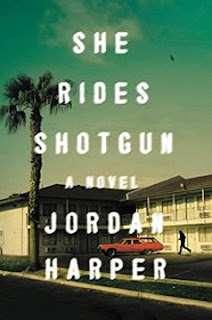 Polly is eleven years old. She is the “she” who rides shotgun in this unusual debut crime novel by Jordan Harper.

Nate McClusky, Polly’s dad, has just been released from prison. Shortly thereafter, the bodies of his ex-wife and her husband are found. They have been murdered. Polly knows who her dad is, where he is, or at least where he should be … in prison, so it is a bit of shock when he shows up, hard eyes and dangerous attitude on display, to pick her up from school. Polly is uneasy but goes with him. He doesn’t take her home but goes instead to a motel. He won’t explain what is happening, but the very smart Polly McClusky is no dummy. After Polly finds out about her mother, she sets Detective John Park on her trail to save her. Then she learns a crucial piece of information, and everything changes.

This is a very unusual crime novel, with an eleven-year-old protagonist. She starts out as a Charles Atlas weakling who develops strength, conviction, and intent, and blazes off to avenge her mother.

Harper has an unusual storyline with bad bad guys. However, there is one little bit in which a character goes to talk to a meth cook, because she knows “the language.” Without making us privy to the conversation, the important plot point is paved over. (I would have liked to have known what on earth would convince a meth cook to give up his boss’ hideout to a stranger.) It’s a hiccup in a generally dramatic and creative debut novel. My favorite scene stars Detective Park at the end of the book. Harper shines in depicting the short but galactic journey Park takes to save what he thinks is an innocent eleven-year-old girl.

With the movie “Kill Bill” currently a public focus in the news, it made me think that Polly will be “The Bride” when she grows up. Strong, smart, and kick-ass.