The Widows of Malabar Hill by Sujata Massey 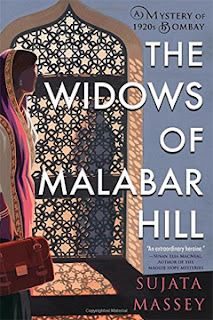 Sujata Massey created the Rei Shimura series, beginning with 1997’s “The Salaryman’s Wife,” a novel nominated for most of the big mystery awards. Keeping to her mission to introduce us to other cultures, her latest book, “The Widows of Malabar Hill,” is set mostly in 1921 Bombay, India. Massey “was born in England to parents from India and Germany, and was raised mostly in St. Paul, Minnesota, although her home for more than a quarter century has been Baltimore, Maryland.” She brings a believable sensibility to what it means to live at the crossroads of different cultures. She also brings an American perspective to it, in that she knows what most of us don’t know. What exactly does it mean to be designated “Indian”? She guides us through the complexity of a little part of India at a time when British rule was still in place.

Perveen Mistry has had a long and rocky road to becoming the first female solicitor in Bombay. She is a Parsi and her family lives a progressive Parsi life. What does that mean? We find out as Perveen navigates the legal shoals of helping a Muslim family, befriending a British woman, and dealing with a religiously conservative Parsi family.

Massey actually has given us two stories, beginning with a nineteen-year-old Perveen in 1916 struggling to take classes at a Bombay law school, and suffering the bullying and vicious pranks of her male classmates. Should she succeed in graduating, she will not be able to take the bar. Because she is a woman. But her progressive father, Jamshedji, has a law practice and wants her to join his firm, even without bar credentials. When the action shifts to 1921, we are missing some of the crucial pieces of the 1916 story. How did Perveen meet her British friend, Alice, at Oxford in England? Who is this Cyrus of whom she is so afraid? Massey believes in tension held for as long as possible, as she gradually reveals what happened in 1916.

The 1921 story has to do with one of Perveen’s father’s clients who recently died. He left three widows and four young children. The women are in mourning seclusion and only a woman can talk to them about settling the estate. Enter Perveen. There appear to be some problems with how the women want the estate to be handled. In dealing with the brutish, dismissive male house manager, Mukri, to resolve the financial concerns, Perveen's simple task becomes onerous.

After someone is murdered, Perveen then has to deal with the dismissive police, most of whom are white. She manages with the help of her friend Alice and, better yet, the influence of her father, Sir David Hobson-Jones, a councillor to Bombay’s governor. Alice and her father exist mostly to show how difficult it would be to deal with the colonizing authorities otherwise. In the end, Alice proves to be a delightful sidekick. (If you watched the Melissa McCarthy movie, “Spy,” think of the character of Nancy, played by actress Miranda Hart. Alice is a less goofy but just as exuberant Nancy.)

Perveen’s past story is heartbreaking and her present story is a triumph of stubbornness.